Iceland has become the Neverending Story of Michael Ende, and is that to find reality, you have to turn away and go through the fantastic. So I’ll say it in a more up-to-date way, the winter is coming, a motto that comes to me perfectly, because here, almost touching the north pole, it’s a cold place, and because it’s one of the shooting locations of Games of Thrones, and like Jon Snow, I do not know nothing. Nor of the luck I have had to survive the storm of Hofn, or to have reached the end without the need for a snowplow. Welcome to the last color of the Icelandic flag, white, like ice. 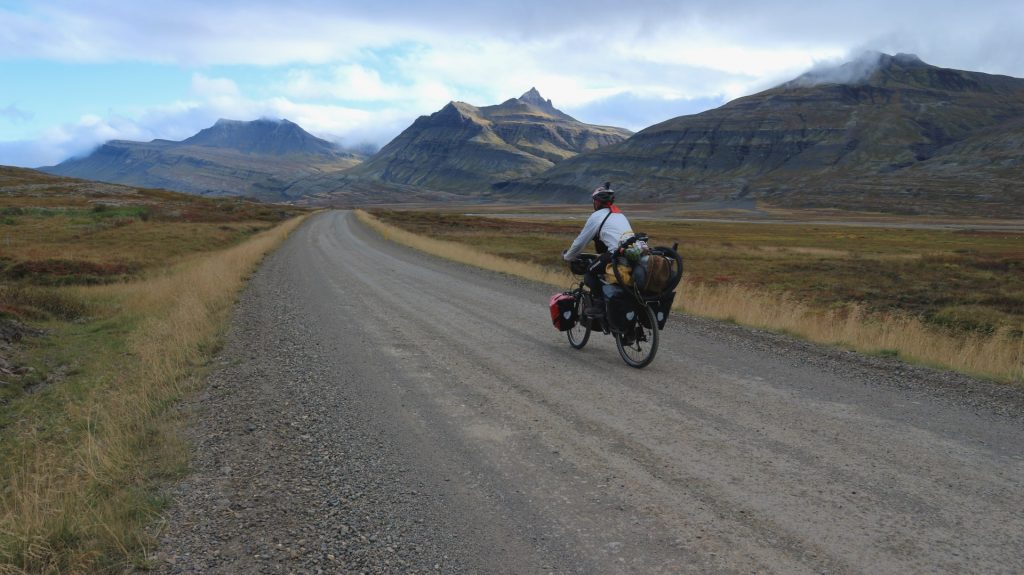 If anything I have learned is that you are never prepared for what may happen in Iceland. I decided to go out on Sunday after five days resting at the campsite. Physically I was not very well and these days it was great. I started the east coast with one of the best days of the season, twenty degrees and sun, it seemed summer… 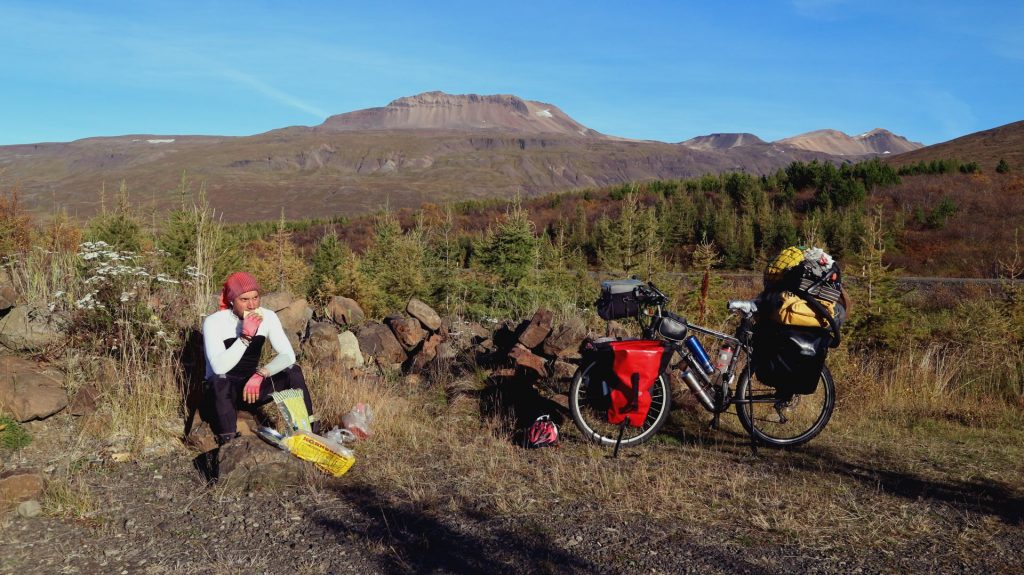 Obviously you have to enjoy the good days. I introduce you Hallormsstadur, the largest forest in Iceland. You can take a photo with more trees … but in this I am 🙂 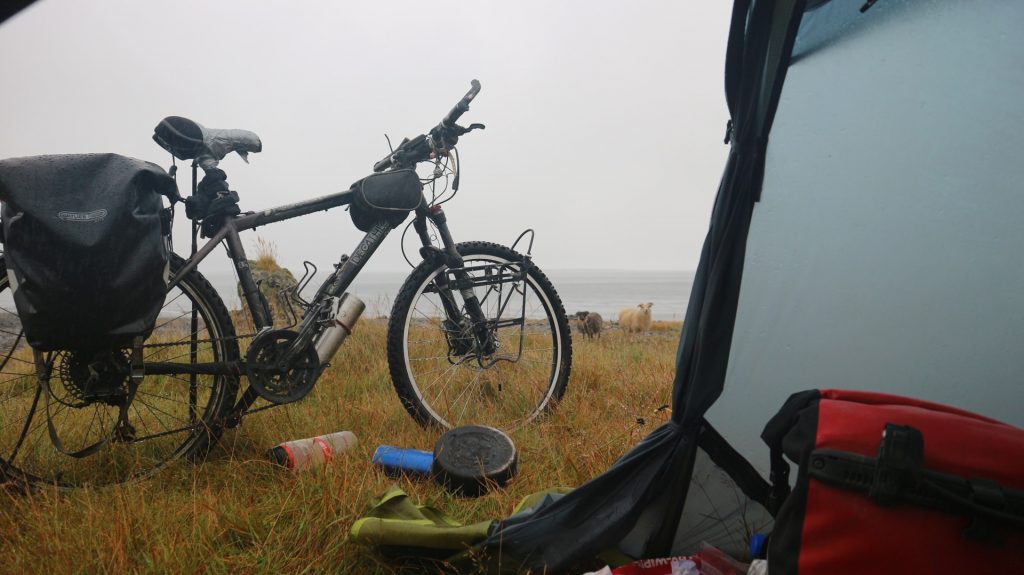 Well, see, I mean … I almost lost the west coast! Usually travelers in this section choose two options: 1.- Travel on the Ring road and cross the Öxi Pass, for those in a hurry. 2.- They travel on the 92 towards Reyðarfjörður and continue on the 96 following the fjords, for those who have the time and desire to see everything (what I wanted to do). But you already know me, I found a third option, go by the ring road, skip the Öxi pass, skip the 92, and consequently two fjords, and end up sleeping with sheep… 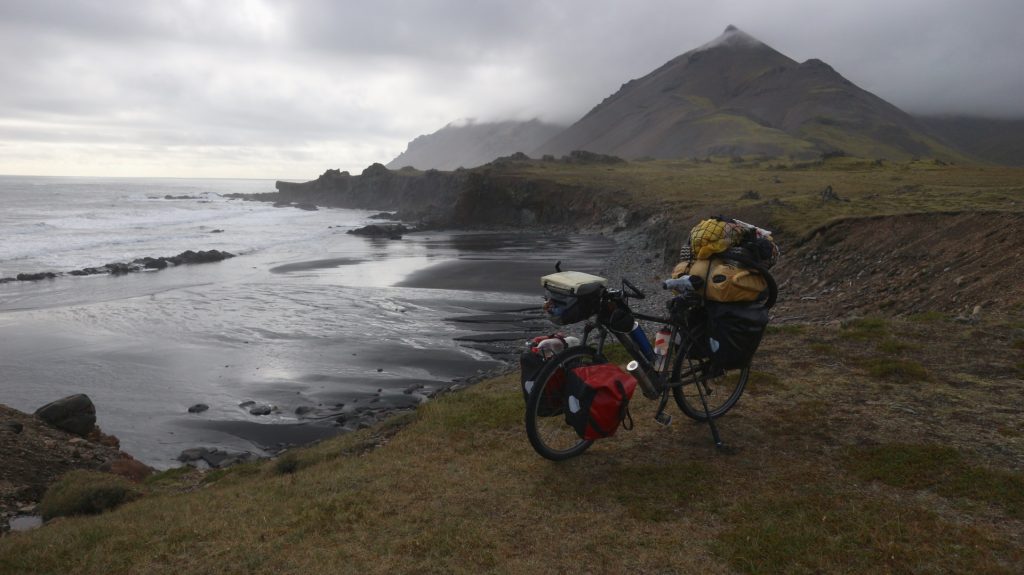 Luckily, I was able to see some of its coastline and fjords. They are greener than the fjords of the west, in my opinion, although the fall and a few days ago that has begun to autum work up here. Its mountains that seem made with pieces of lego, and its beaches of black sand, do not leave indifferent to anybody.

The south coast: The storm 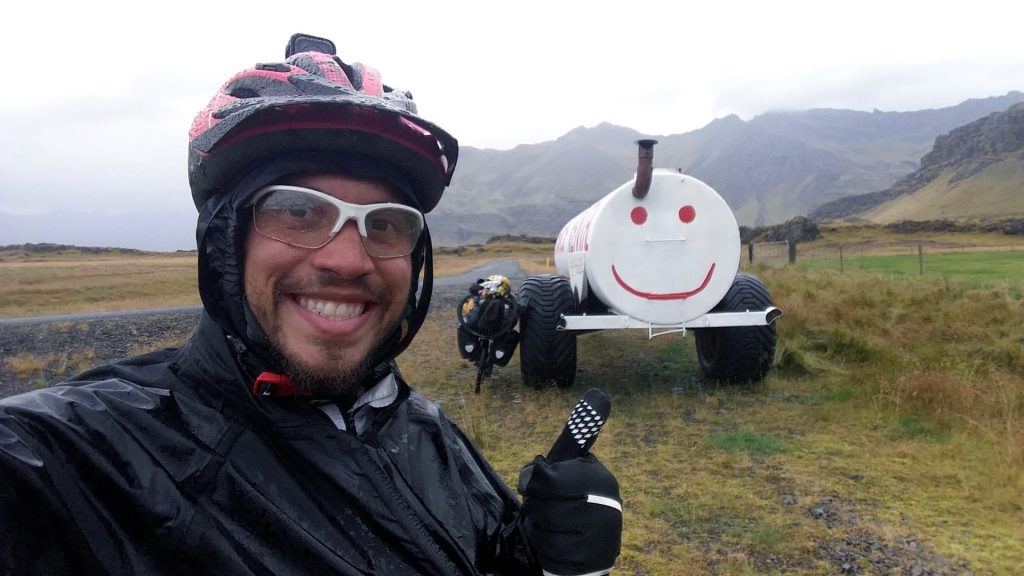 We started with this photo because that was how I arrive to Hofn, happily soaked. It is difficult to share my experiences these days because the storm of rain and hurricane winds prevented me to use the camera as I would have liked. And as you will see I was very lucky… 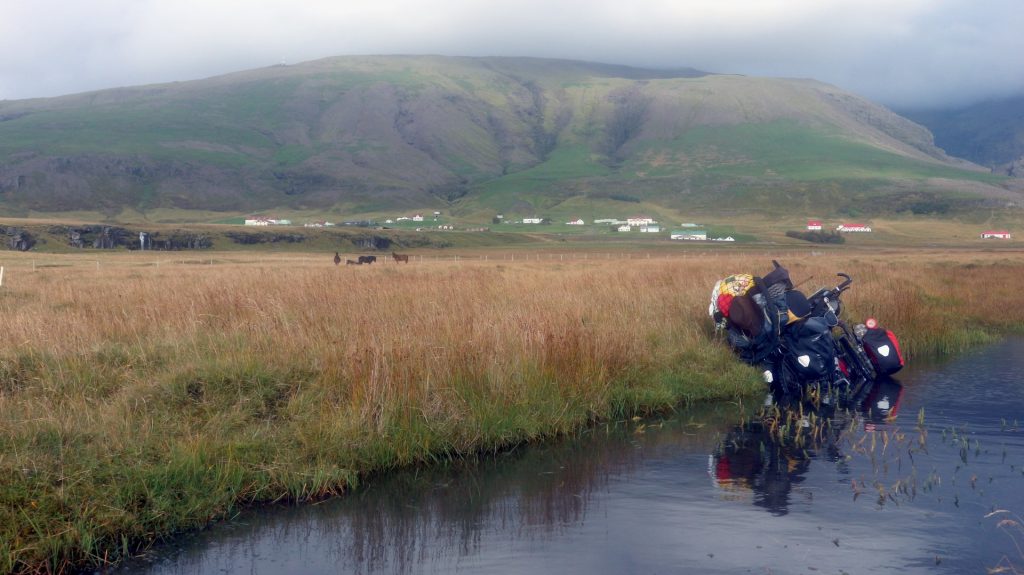 When I left Hofn I spent a day locked up in my tent on the top of a hill, I’m sorry there are no pictures of that moment, the wind was so strong that it broke the tent of Jean, a Korean guy who joined that day with me to the route, the poor man, had to leave fast the next day. I got out of the weather festival that we had gotten into and the next night I camped on a hillside, thanks the advice of some farmers, and there I dawned in the middle of a quagmire. Luckily, camp a little higher than the rest of the land … but leaving the site was an odyssey. The good news is that I managed to cross just before they cut off the general road two weeks because of the river overflows 🙂 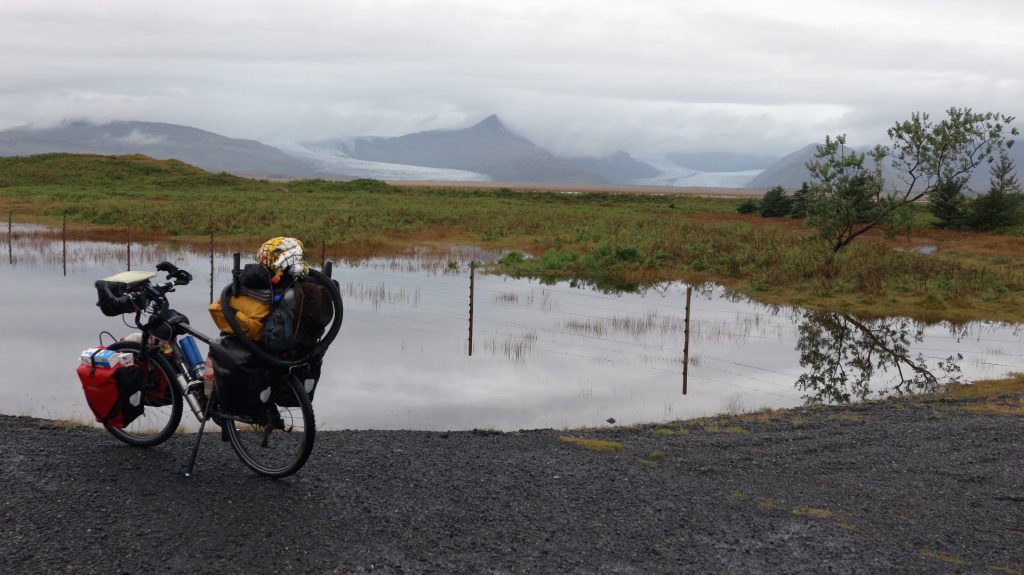 I had to take advantage of the moments that stopped raining to be able to take some photos. On many occasions, the clouds wanted to touch the ground, and the horizon was nothing more than a thick foggy wall. But when it cleared the landscape changed completely. 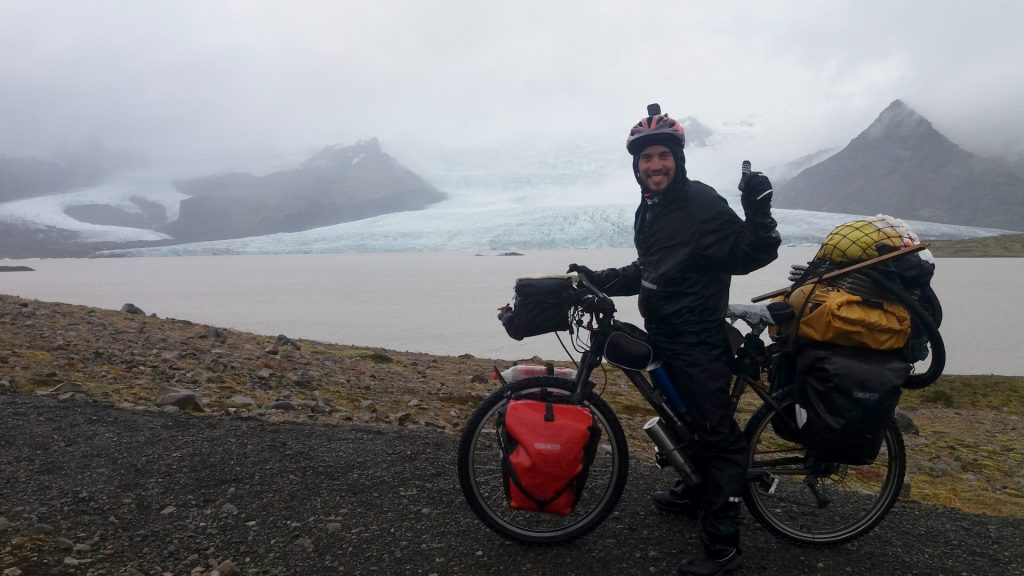 Although it did not clear enough to appreciate the magnificence of Iceland’s largest glacier. Vatnajökull is the largest of all occupying 11% of the island, and the largest in Europe according to National Geographic. 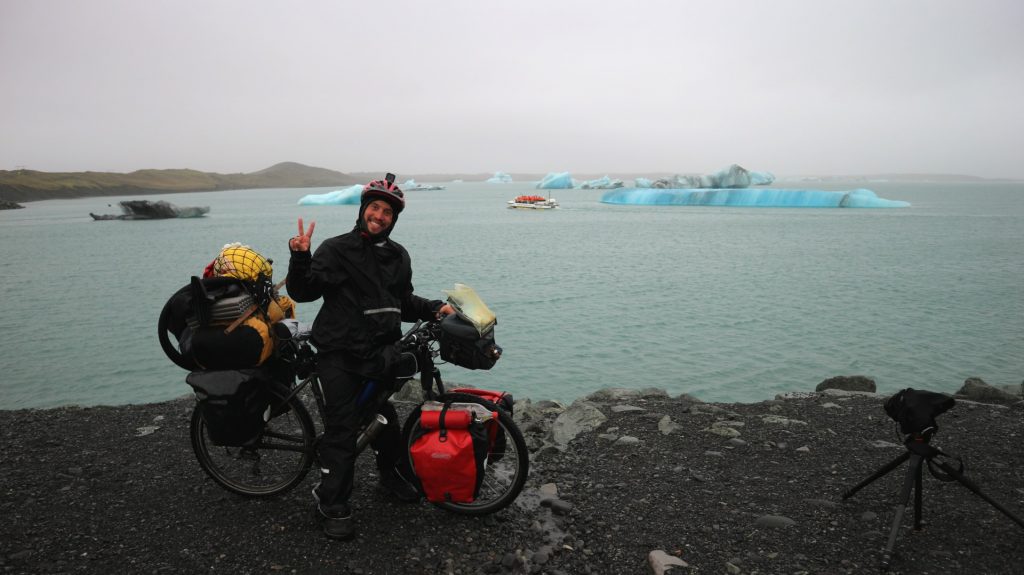 But what struck me most were the icebergs. These huge ice sheets break off the glacier and drift, drifting across lakes or into the sea. Currently the glaciers in Iceland are in recession, this means that each year they are smaller. It is, without a doubt, the clearest effect of global warming. 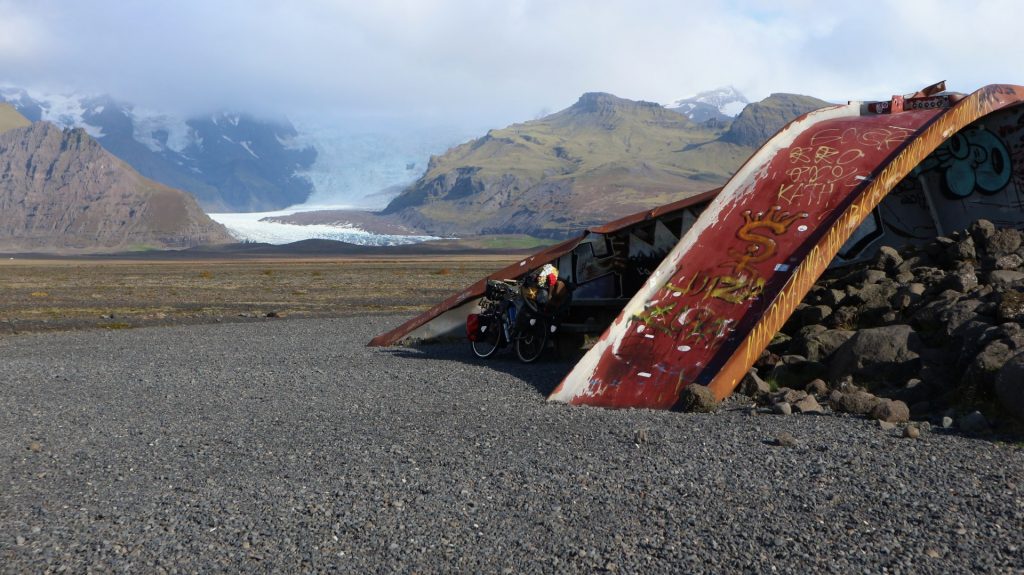 One of the many catastrophes that can happen due to a very active climate are the landslides and water after a volcanic activity that affects the glacier, this is called jökulhlaup. In the photo we see the Skeiðarársandur, are the remains of the bridge that remained after what happened in 1996. 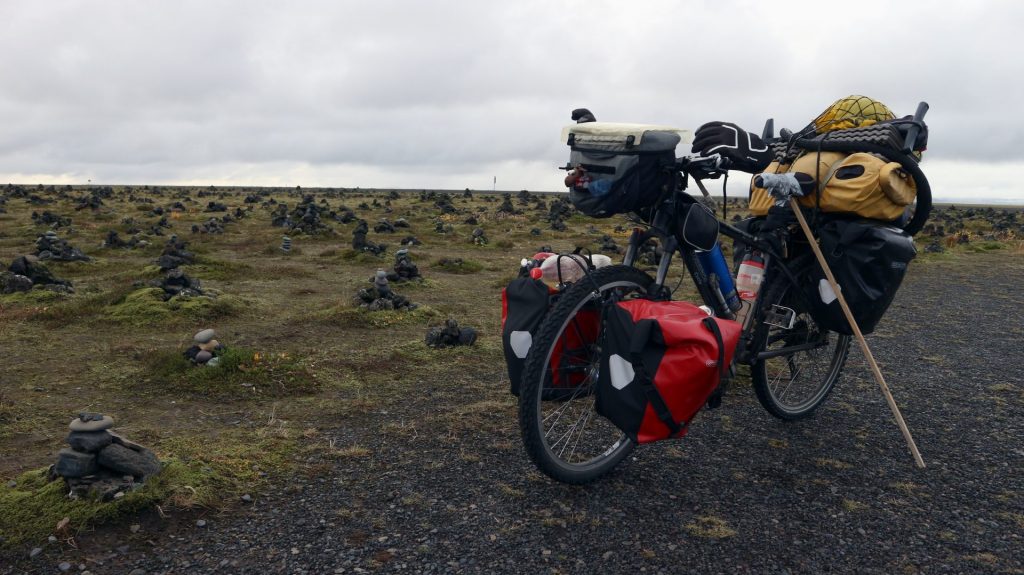 Around the ring road, we find these stone mounds in Laufskálavarda. This place pays homage to the farm that was in the area on 894dc, destroyed by the eruption of Katla volcano. It is impressive to see that despite time, they do not forget. 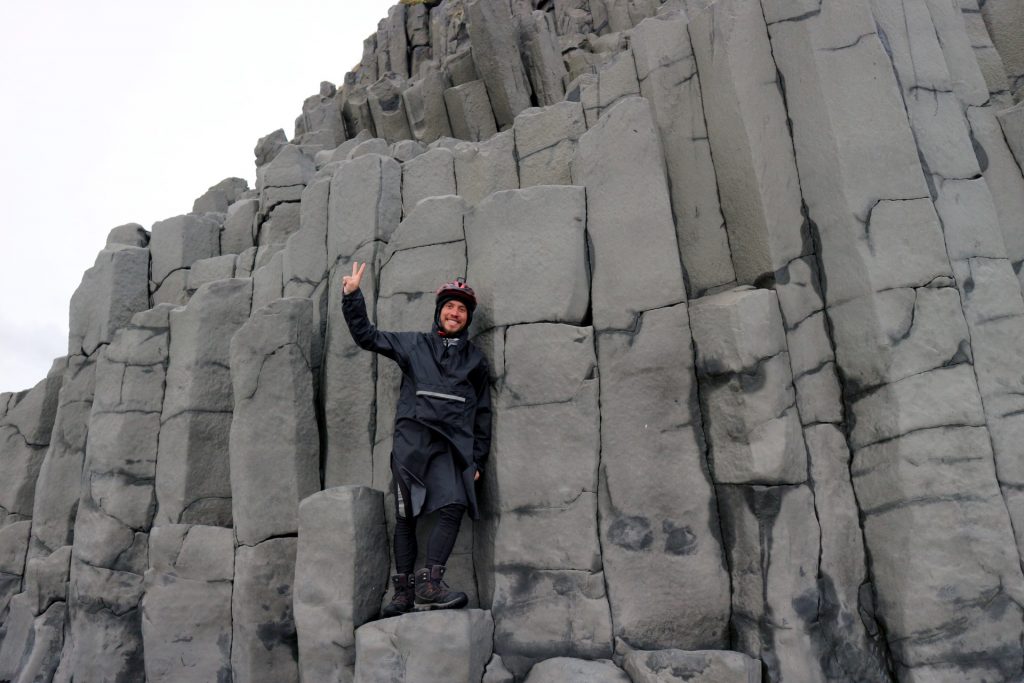 In Reynisfjara I found these incredible hexagonal columns of basalt. They have some similarity to the giants causeway in Northern Ireland, but with less quantity. 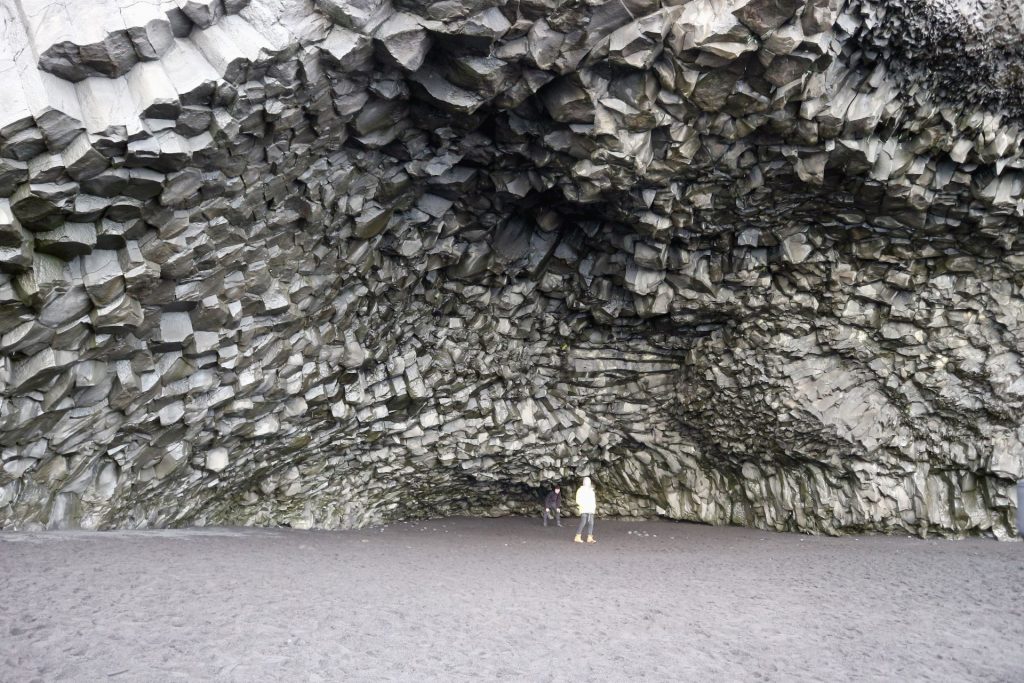 For me, despite the incredible views and its beach with giant basalt columns, what I liked most was the cave. Its vault made with hexagonal stones is really impressive. Although by the amount of water that drips from the roof I do not think that it protects much of the weather… 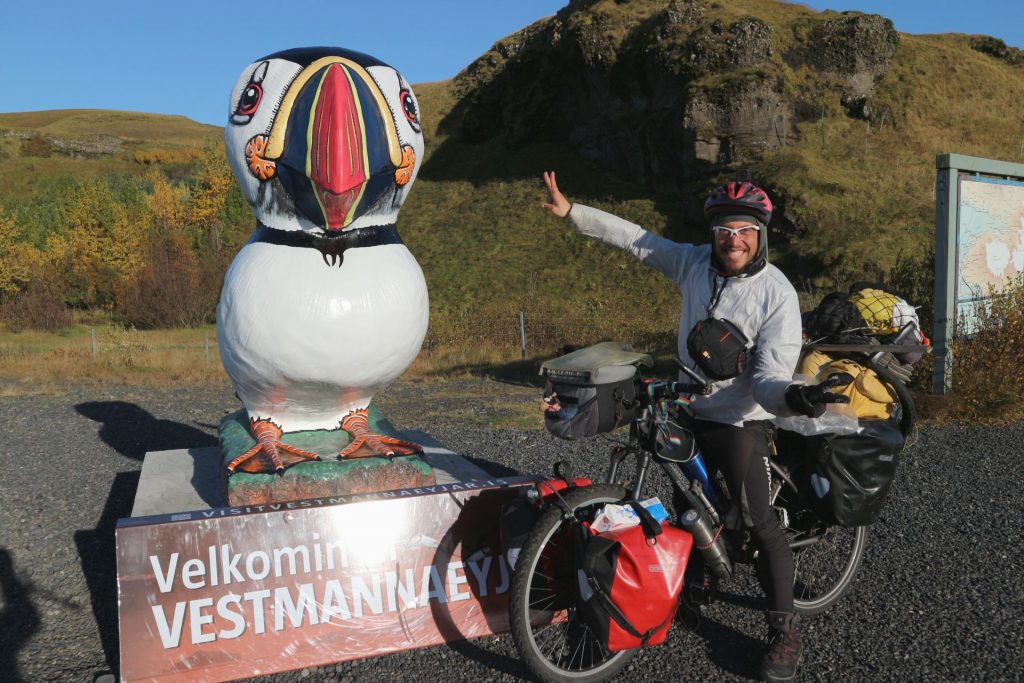 The pity was to see that the puffin season was over. It is a mystery where these birds are going in winter, some say that they go south by tropical areas, others claim that they are heading to the sea where they spend the winter floating. I see more likely the first choice, although of course, I am not expert 🙂 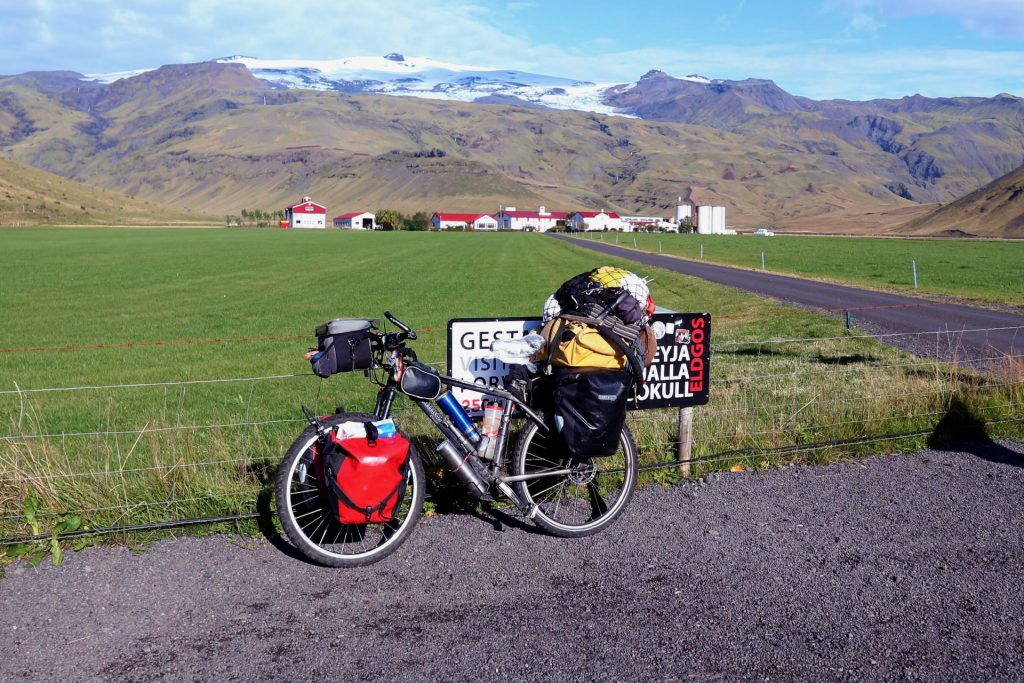 Luckily this year we have not suffered any eruption from the giants of the island. The last to wake up was in 2010 when the volcano Eyjafjallajökull decided to cover the sky under a mantle of ashes and fire. Today it sleep calmly as you can see in the photo. 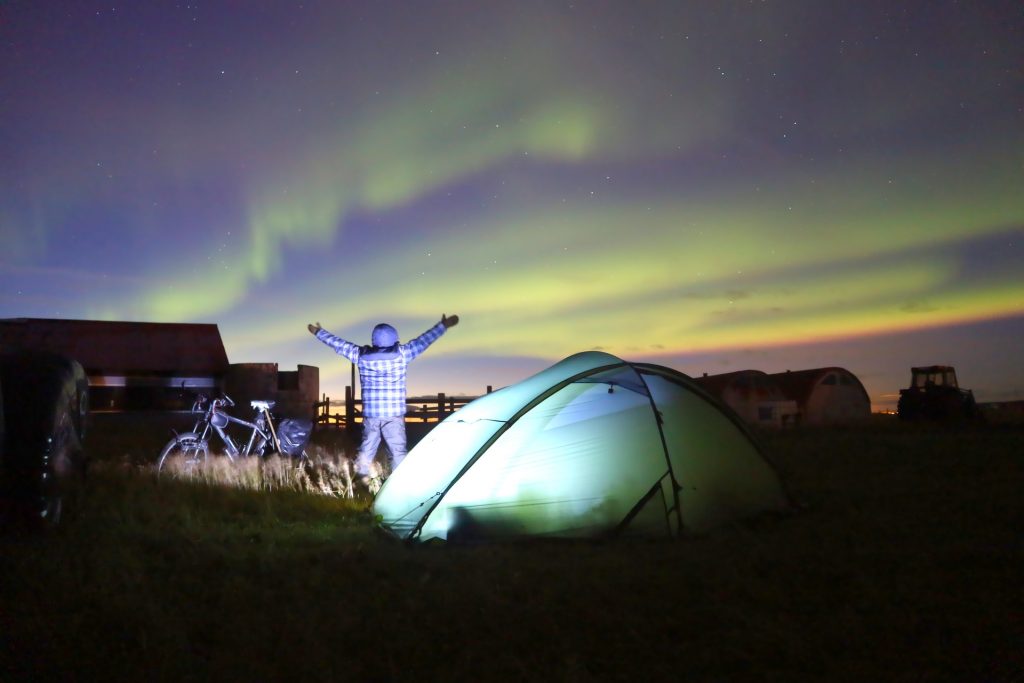 I’ll say it one and a thousand million times: Thanks for helping me with the new camera! These last weeks have been complicated to see auroras, because the sky has been cloudy all the time. But perseverance has its reward 🙂 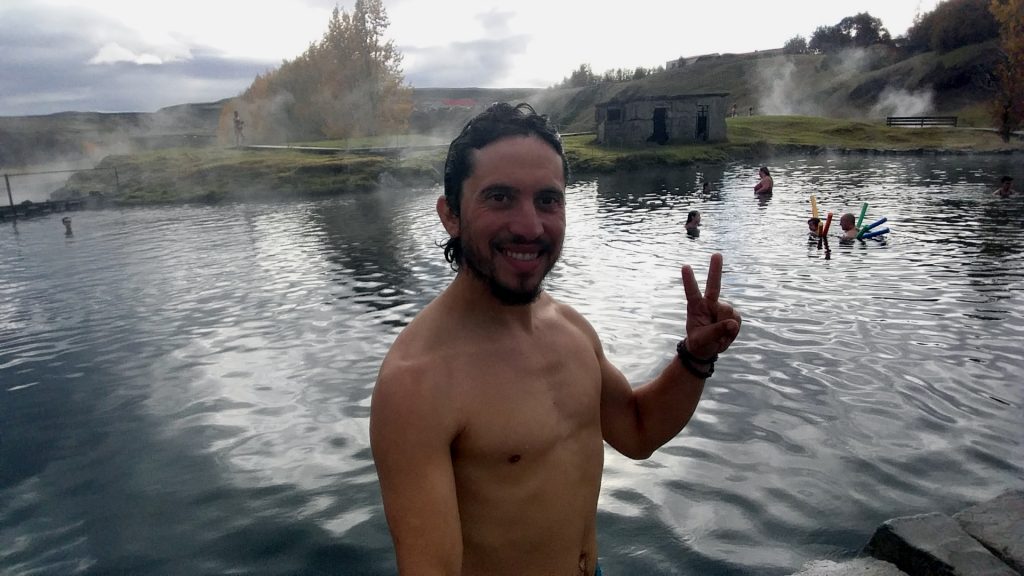 And since we are grateful, another one for one of my best friends. Thank you, Lorena, for this gift at the Secret Lagoon. There is no better thermal water on the whole island 🙂 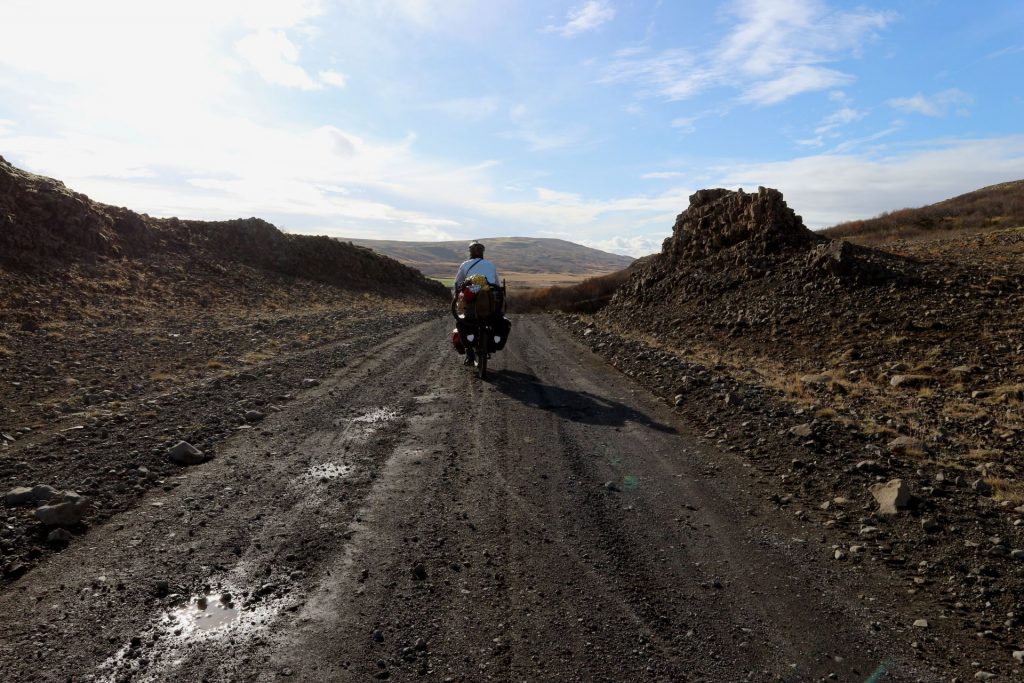 After leaving Flúðir, I went to one of the favorite destinations of the golden circle. Luckily I found an Icelandic cyclist group advised me funnier and lonely road to arrive at Gullfoss. 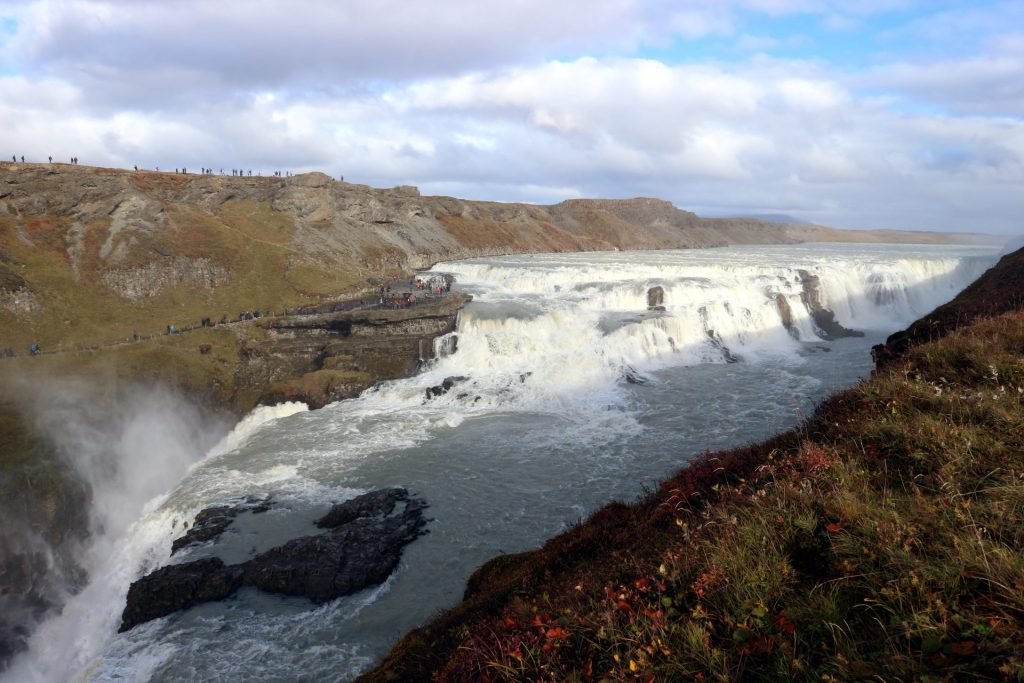 We start with the most famous waterfall of the river Hvitá, Gullfoss. As you can see, I’m on the opposite side of the pile. The golden circle takes all the tourists by the west side of the waterfall, I was more alone than the one on the east side of the river. A privilege! 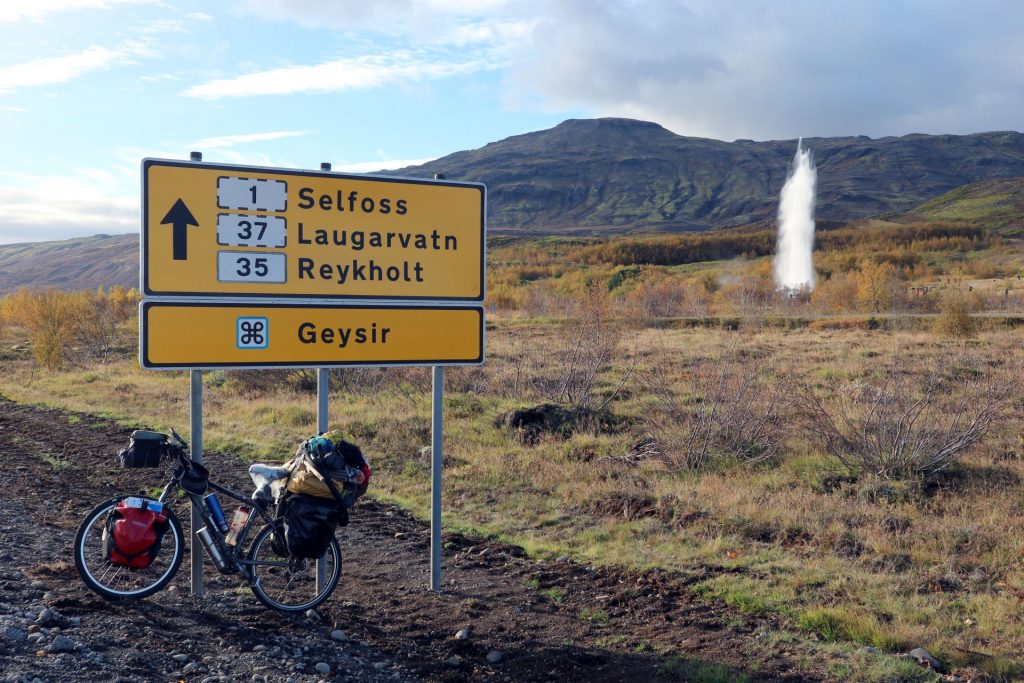 A few kilometers away we find the valley of Haukadalur. This name is shared by three valleys in Iceland, but the one that interests us at the moment is the one that is in the golden circle. In it we will find the most famous geyser, and the one that gives the name to all the others, the Geysir. But the great Geysir stopped working because of the number of objects and shit that tourists throw into the hole. The one we enjoy now is called Strokkur and is capable of expelling water at 20 meters in height. I hope we learn and not destroy more things… 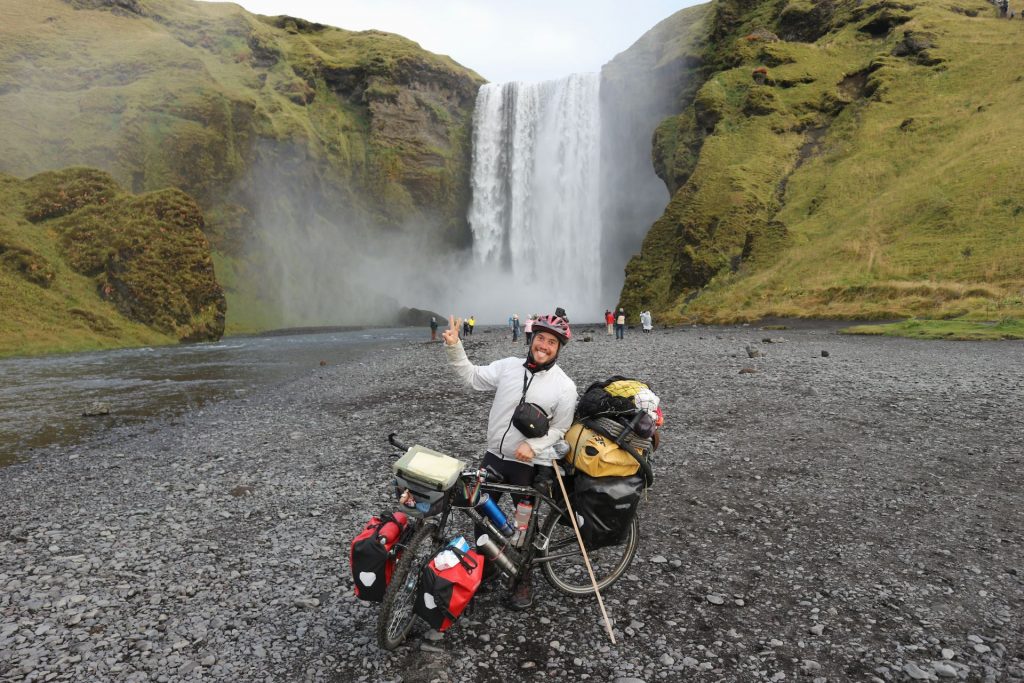 This you see is not really in the golden circle, but I already talked about Þingvellir in the previous post. What I show is called Skógafoss, another interesting waterfall near the capital and Selfoss. 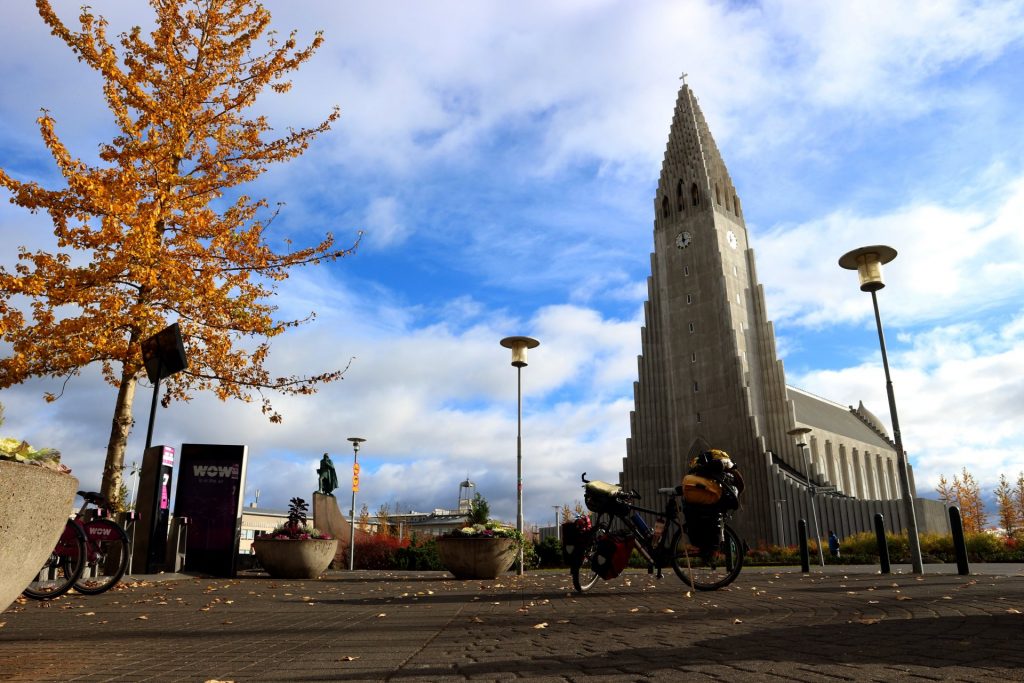 After a month and peak I returned to the capital of Iceland. Once again my good friend, Edda, helped me with logistics and accommodation. What would I do without friends like her? On the other hand, Reykjavik waited for me on an almost sunny day. I was able to enjoy his Lutheran church, Hallgrímskirkja. Although almost all we call cathedral for its architectural magnificence, in fact it is not. The city has two cathedrals, but this church is more impressive. 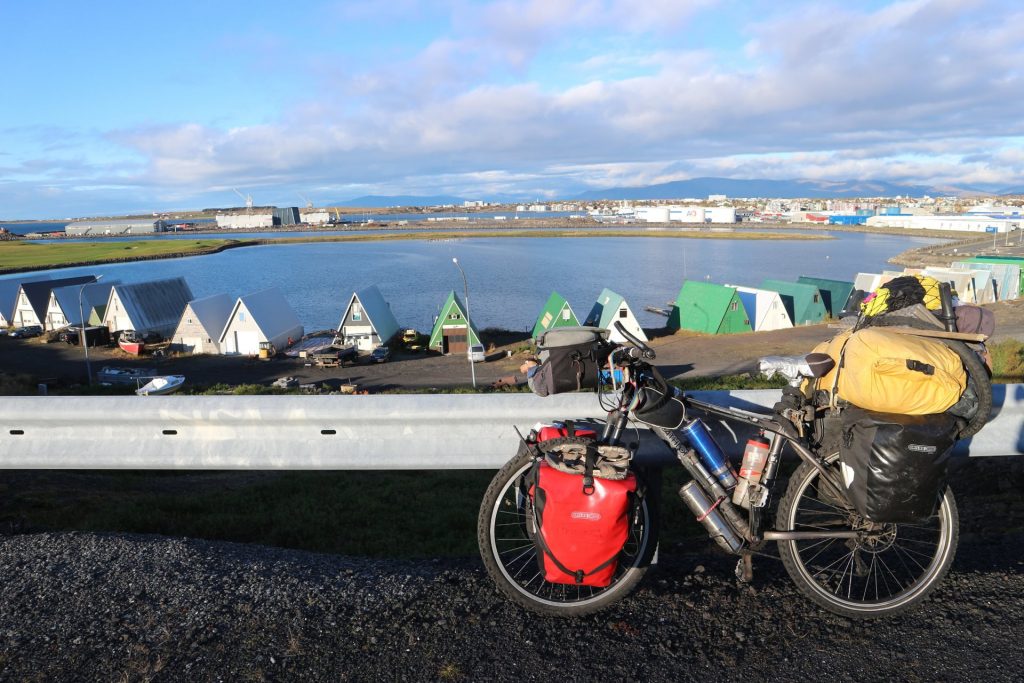 I was planning to write more about Reykjavik, but once more I returned to the city in a hurry and without time. The buildings that I liked the most were these. They are in Hafnarfjördur, which means natural harbor. They are small houses of fishermen, all have a small pier where to embark to the sea. 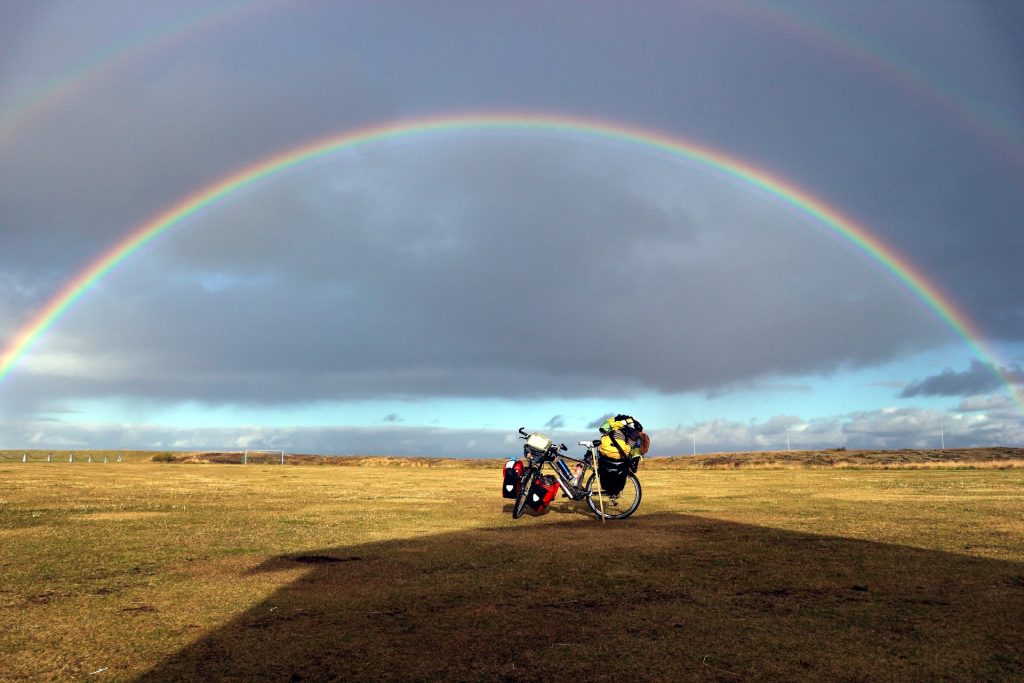 In Vogar, I found this scenario. The campsite is completely free of charge and is located relatively close to Keflavík International Airport. 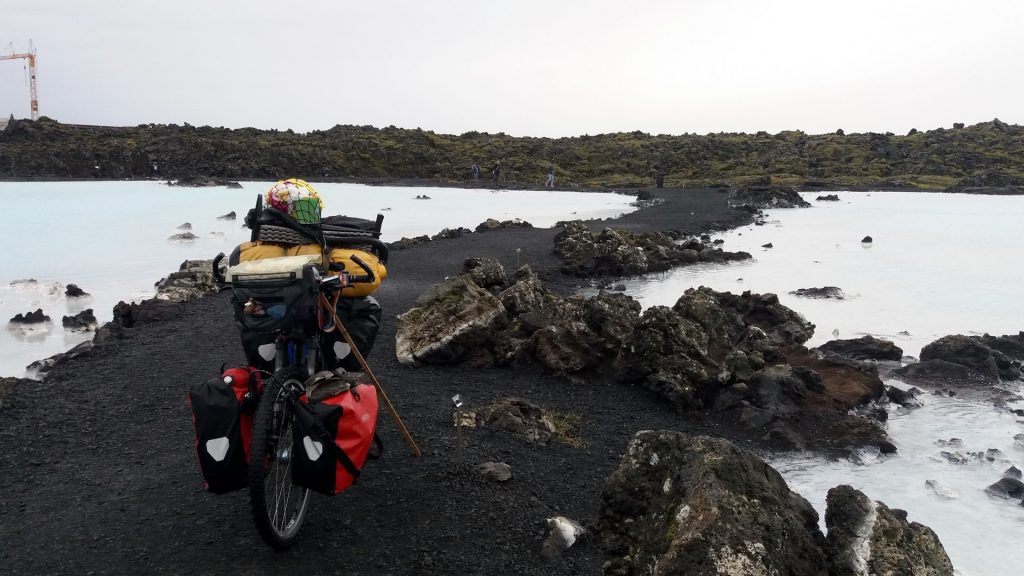 My penultimate day of the cycling season I spent in the famous Blue Lagoon, better known in its original name, Bláa Lónið. This geothermal SPA is famous for its medicinal waters rich in silica and sulfur, say it can cure skin diseases. Unfortunately for me, this place is extremely expensive, and you have to make a booking in advance… so enjoy this spa from the outside. Awesome anyway. 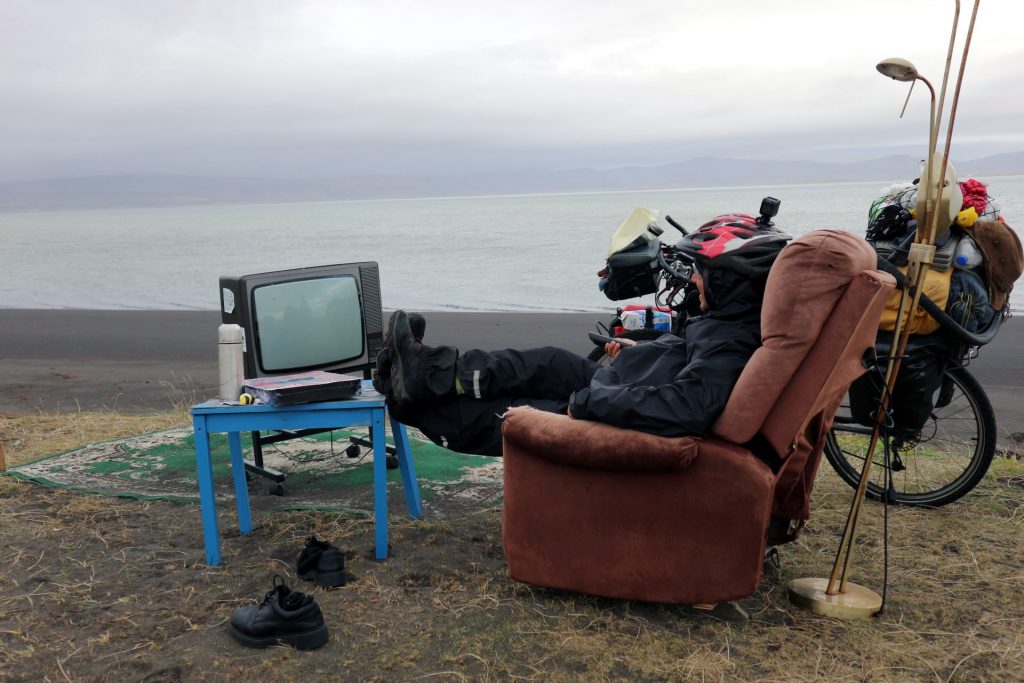 As I said before, this is going to be my last travel post of the year. Touch stop to work, get money so that next year can do more things. I hope these adventures help you to turn off the TV and go out on your own pursuit of happiness. Stop TV! 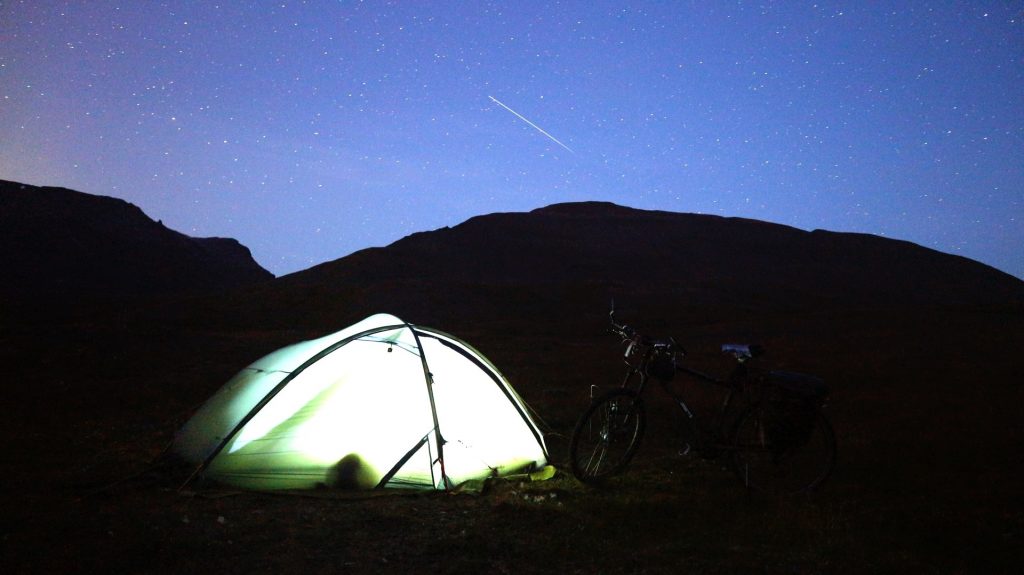 I want to thank Hankur and Bragi for saving these days to Negrita on their farm. If you are traveling and looking for accommodation in the most spectacular nature of the Golden Circle, do not hesitate to visit the friends of Býli Andans/Spirit Farm. Tak fyrir!

Thanks to all for accompanying me in these 4,574 kilometers that I have traveled to Iceland, and the 22,330 kilometers I have done in Europe. Hopefully next year can jump off the continent!

A hugs to all!