This second part of the most adventurous island, for excellence or for commercial convenience, comes full of unforgettable moments, with a catastrophic end. Since I left Husavik, the days have flown by the speed of light. I’ve toured landscapes that seem difficult to place in real life, just like in a Hollywood movie. Without further ado, I present the second color of the Icelandic flag, red, fire. Action! 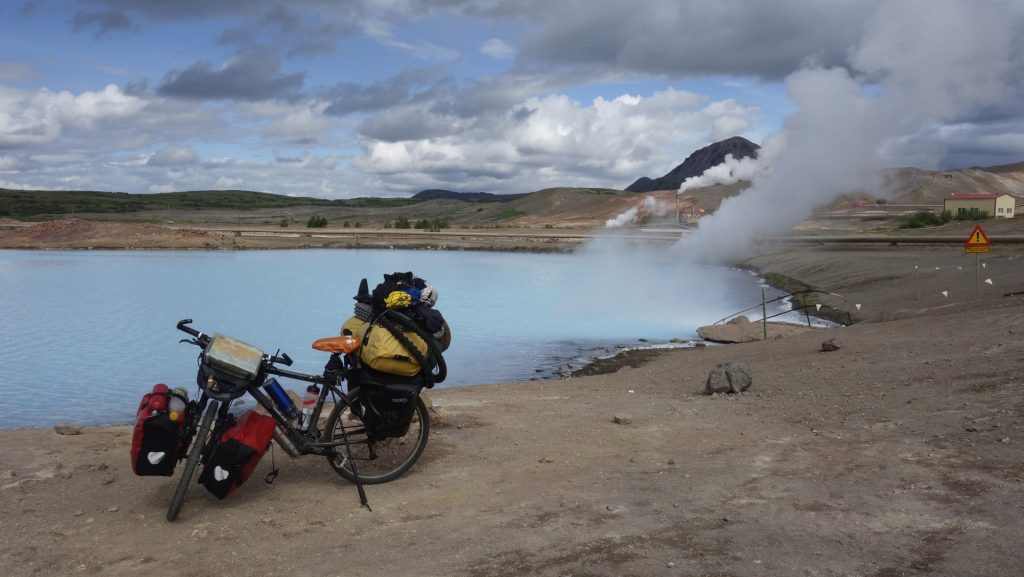 We started with one of the most striking images I saw on arriving at the geothermal area of Hverir. A blue lake dazzled my eyes, with smokes and the slopes of a desert mountain. This natural reservoir of hot springs, bathing is forbidden, although by field investigation, I know that twenty years ago it was permitted. Information from a French friend who was outraged by the tourist change that is acquiring the island. 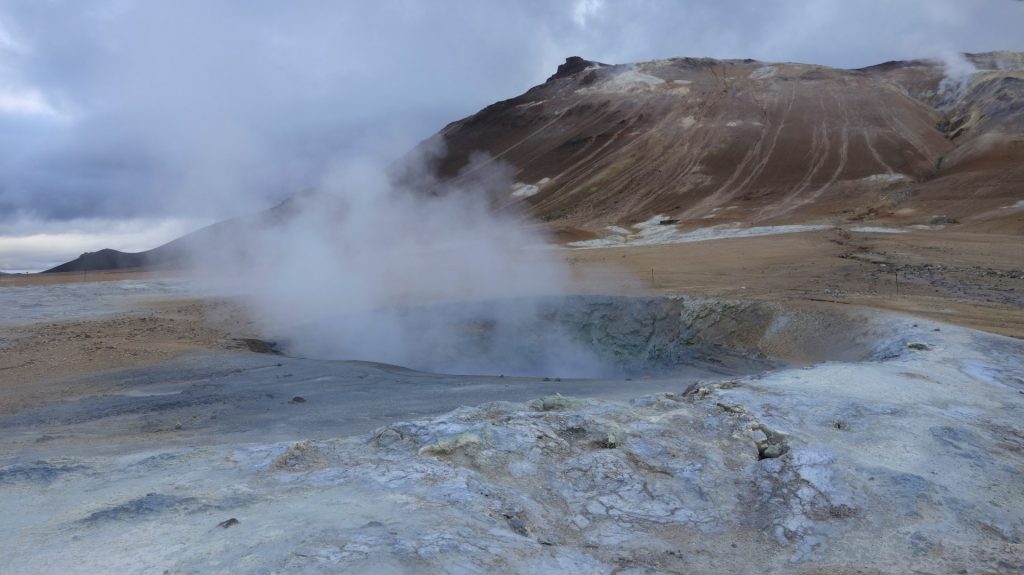 The Hverir is located just before reaching the famous Krafla volcano. General Highway # 1 crossed it marveling at its extraterrestrial beauty. A number of fumaroles and deposits of bubbling water awaited me on the east side of the hill. As if it were the prelude to the red planet. I think we have lost time and money trying to get to Mars, here we have the Hverir, and you can breathe… 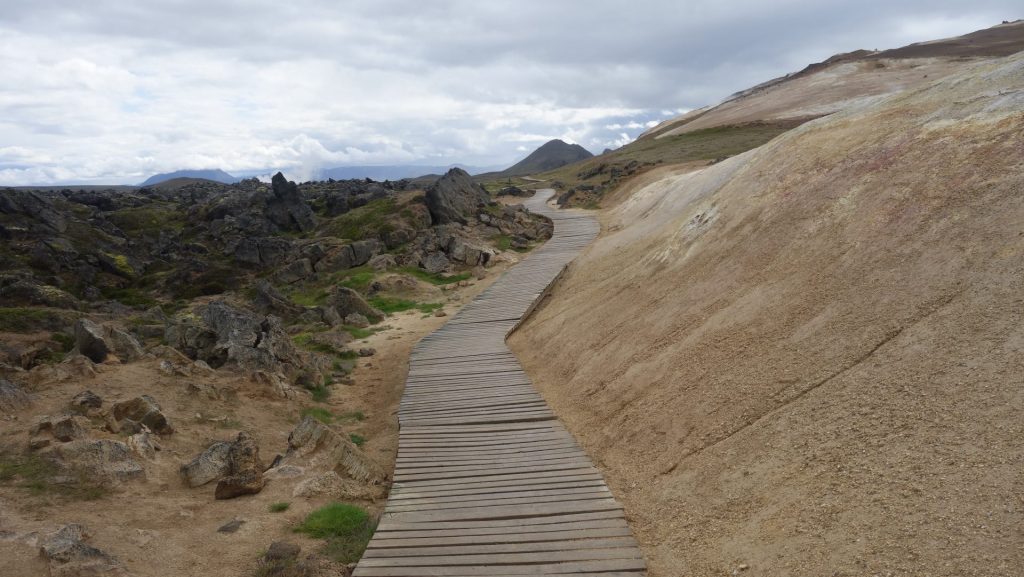 The area is well marked and prepared for tourists, although this wooden walkway is a wet danger, and to believe me, it always is. It takes us to the geothermal area of Namafjall. A place where hell and life fight for the same purpose, leave the traveler fascinated. 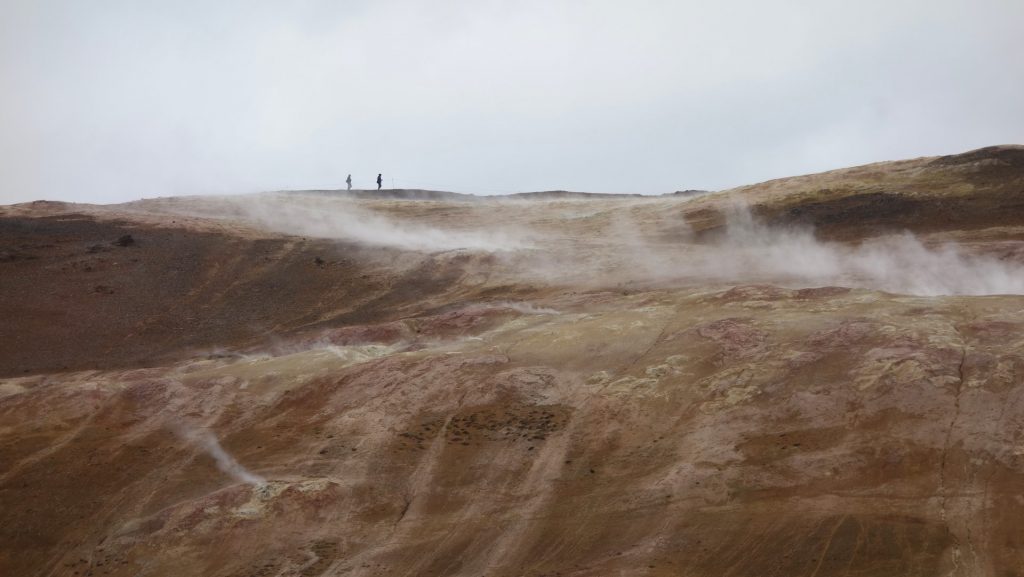 This landscape makes us feel that we live in a world full of fantasy. The heat, and the excess of sulfur in the environment, creates this marvel of ocher colors and stinking vapors where neither flies inhabit. For many places, the only existing life seems to come from the center of the earth. 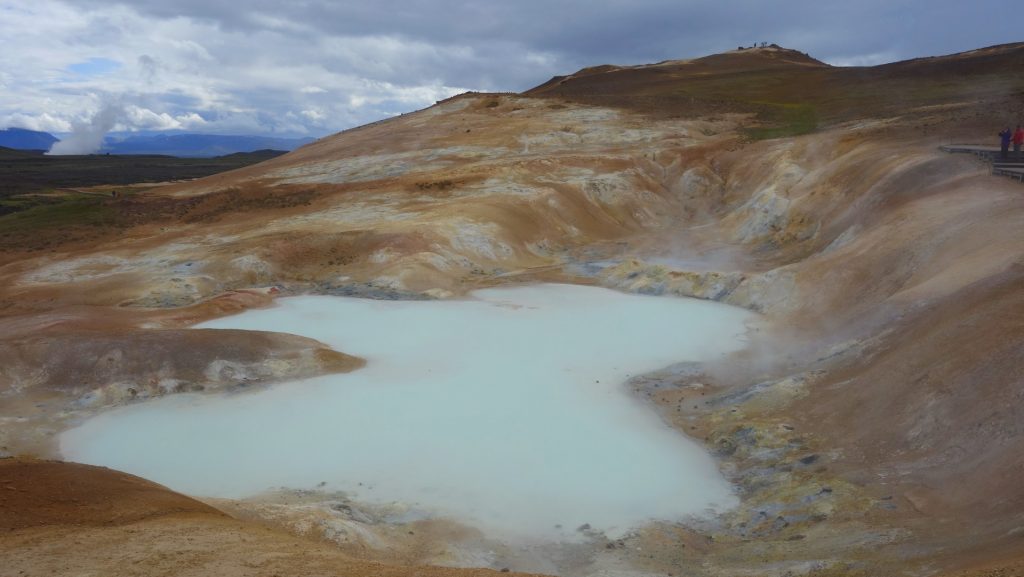 The geothermal area is famous for being the largest sulphate in all of Iceland. Its number of mud pits with boiling water, sulfur deposits and fissures emanating vapors with a terrible smell of gunpowder and rotten egg make it something special. Nothing more to say, than that day I needed to select some of the more than 600 photos I made. Absolutely everything was spectacular. 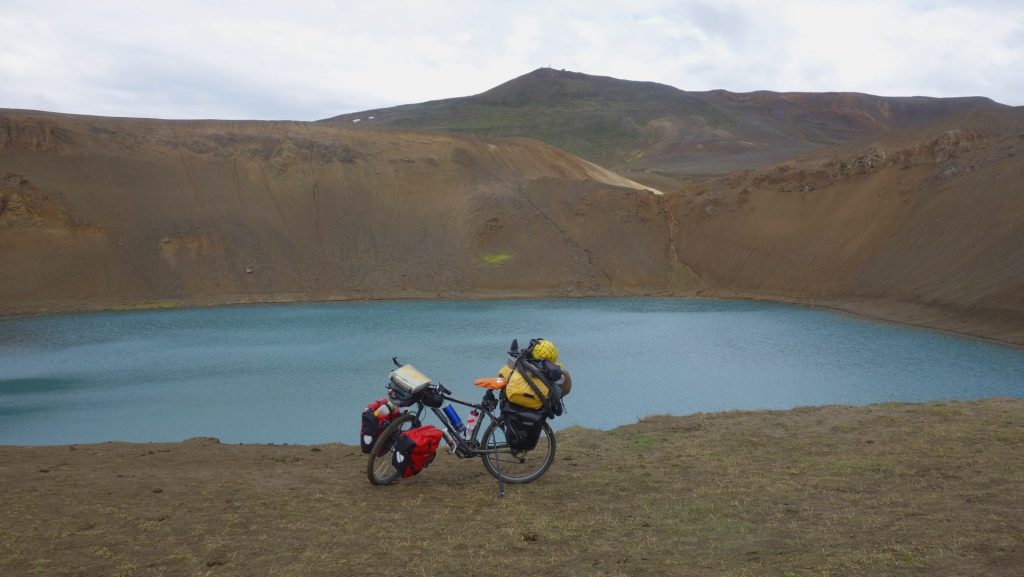 I continued my ascent through the Krafla until I reached the Viti crater. This huge hole contains the famous green lake where all cars and other vehicles are forced to stop. From here, there is a walking tour around the crater that will take you to the top of the volcano. 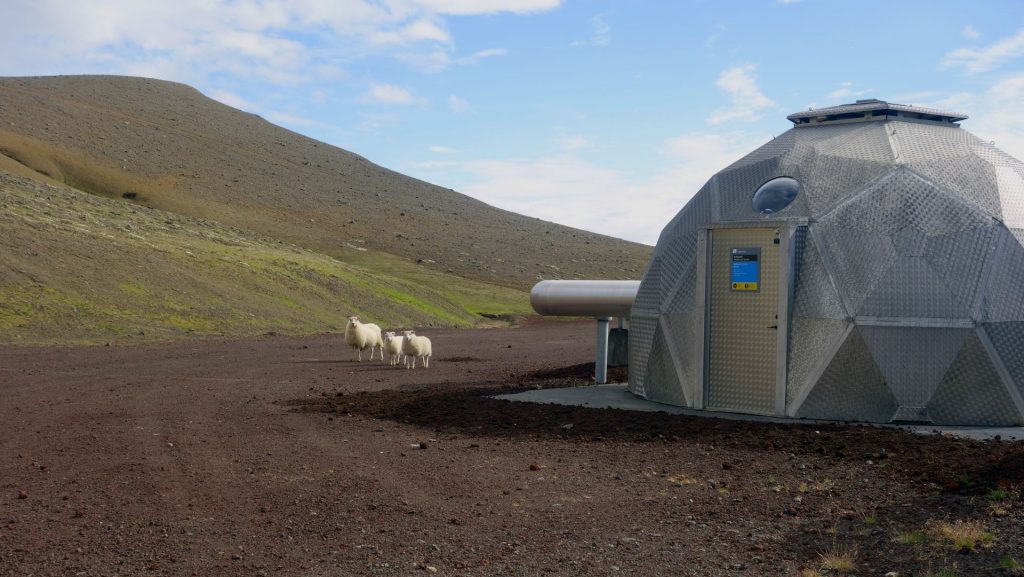 They deceived me all my life. There are no bunnies on the moon, there are little sheep! This area has a strong importance in the country’s energy industry. Thanks to these “spaceships” electricity is supplied to a large part of the island. 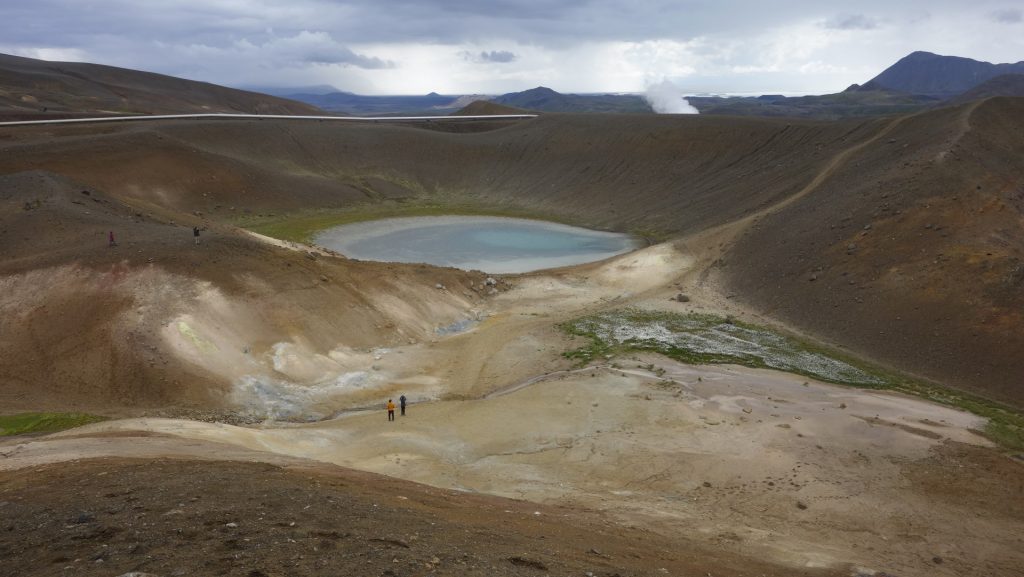 And the views from the volcano are spectacular. I promise, this photo you see above, did not need to be touched. You see it exactly as the camera saw it. 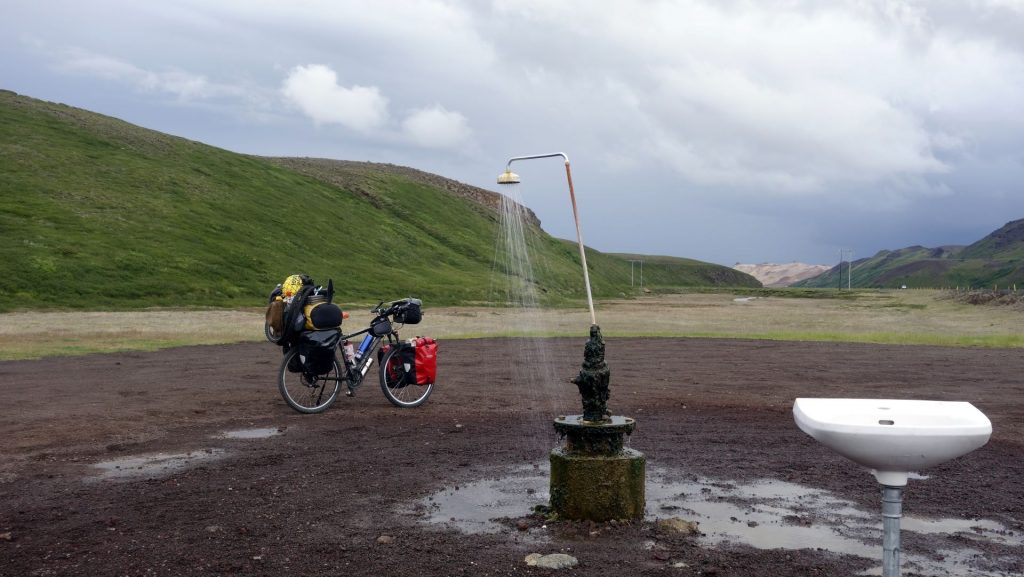 One of the peculiarities of Icelanders, and the area, is that you can have hot water almost anywhere. Here is a shower to wipe away the sweat of the day 😉 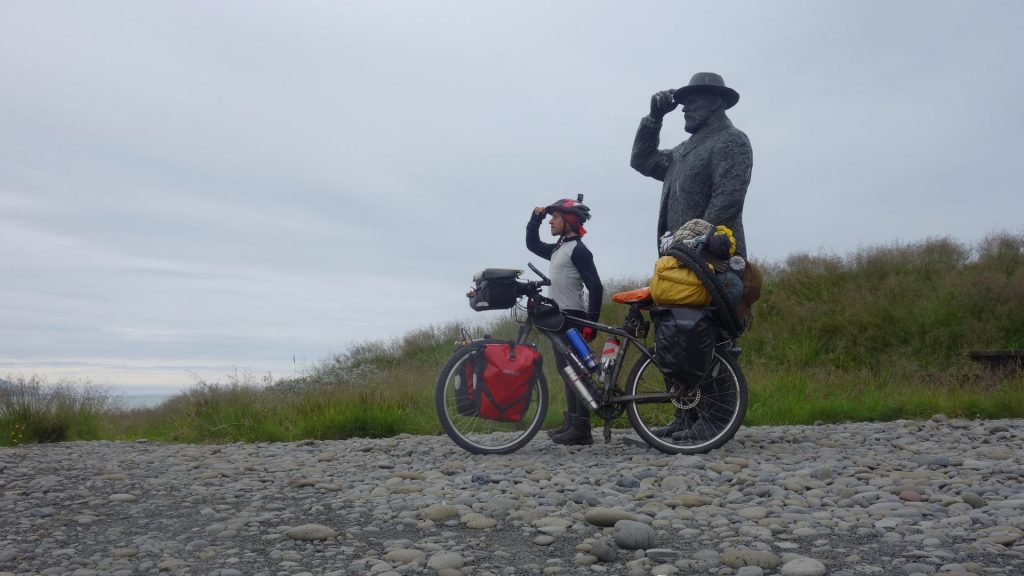 I came back to earth, or so I believed. In front of him he had to go through countless fjords, which hindered the march, but enlarged the view. What I did not expect was to find so much history. Here you raise a stone and you find a legend or myth, which if not fantasy, is historical. 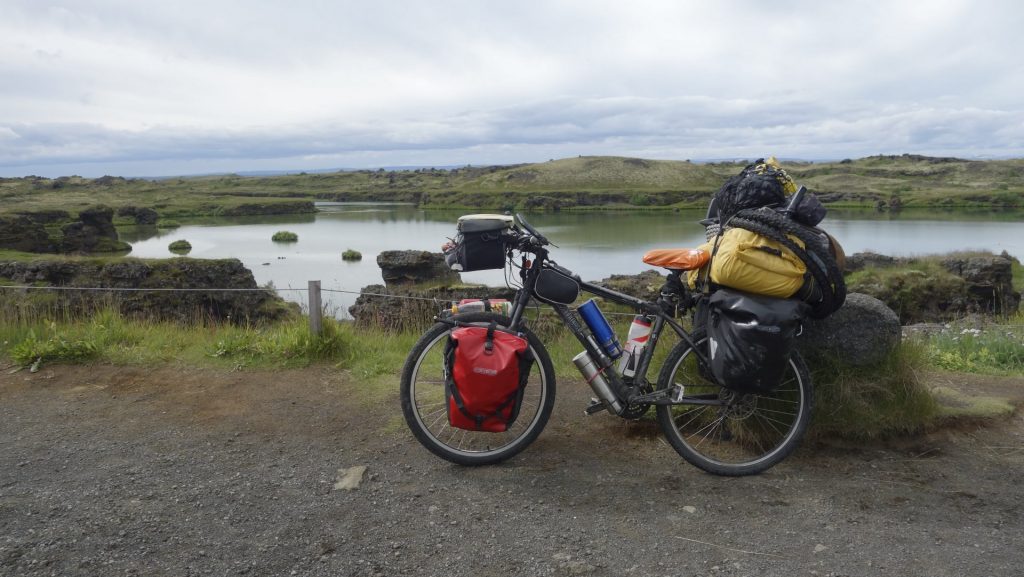 Lake Mývatn is famous for the number of tiny flies flying around it in summer. This attracts a large number of birds, especially ducks, which is of great importance to ornithologists. In my experience I must say that I have found more flies and flying insects elsewhere than in this lake, it is clear that these animals are directly affected by the weather, if it is cold, they do not disturb 🙂 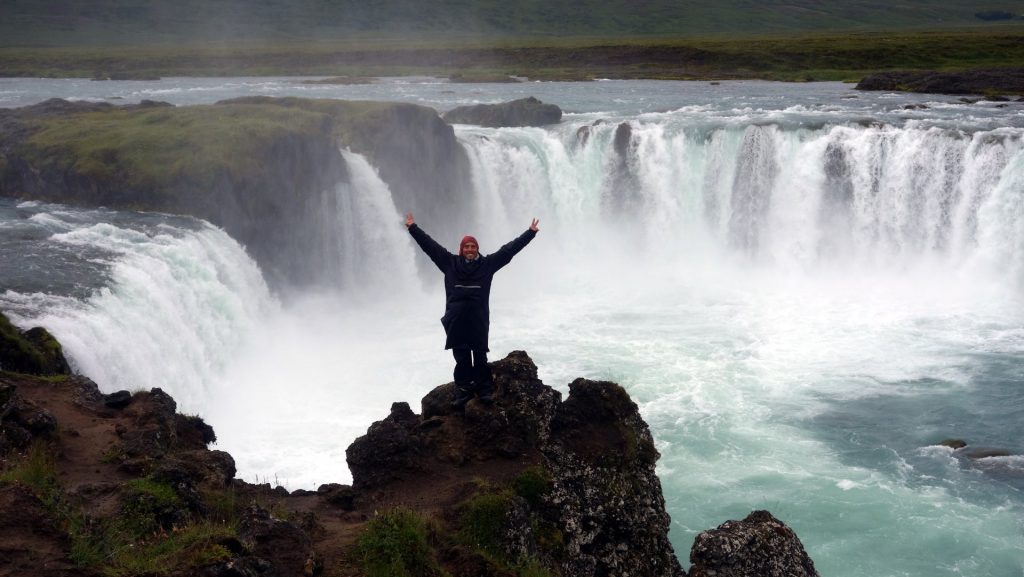 My adventurous impetus took me to Godafoss. This beautiful waterfall hides a very important story for all Icelanders that the vast majority of tourists, when they get there, do not know. Around the year 1000 BC, the lagman (lawman) Þorgeir Þorkelsson, leader of the Vikings, meditated for a night about the future of his country. It is the responsibility of deciding whether to continue the old Scandinavian religion or to change the growing European movement of Christianity. After a long meditation, Þorgeir decides that the best thing for his people is to be a Christian, so the next day he took all his statues of the Vikings and threw them into the river. Since that day, all Icelanders were Christians, and this place became the waterfall of the gods. 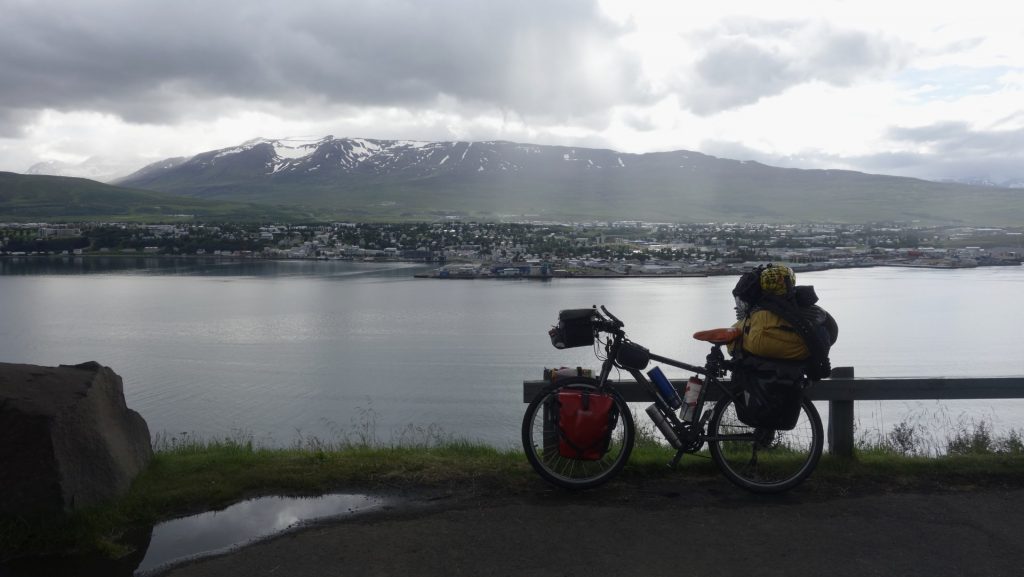 I arrived in Akureyri, the largest city in the north. It is the fourth most important urban center by population of the country. It is situated in a narrow but beautiful fjord, when the narrowest are more beautiful, and mountains that surpass the thousand meters of height. Interesting place to refuel 🙂 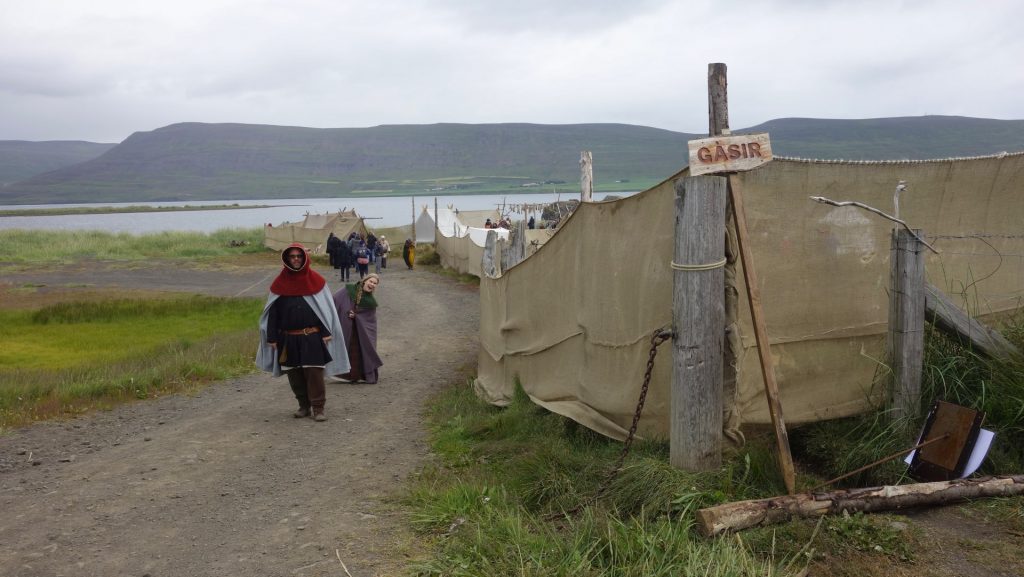 Especially when you discover that you arrive in the week of the medieval fair. Gasir is a small viking village north of Akureyri, older than the city, and where every year an impressive Viking festival takes place. All the locals dress of time, they transform themselves into true Vikings. Here you can enjoy hourly events, perform performances, sing, dance, you can practice your aim with the bow. A live history museum. 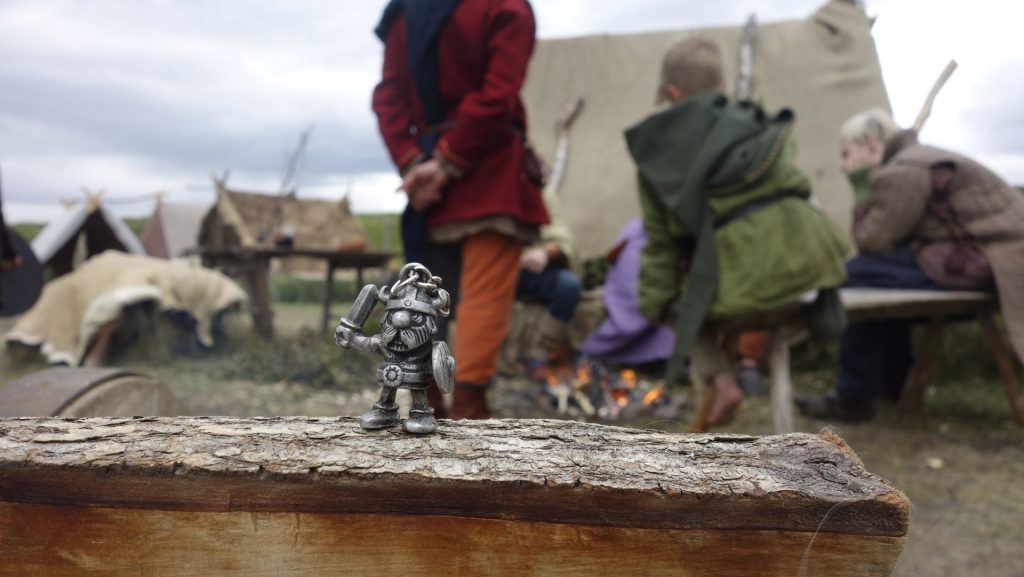 If someone really enjoyed the scene, that was Salvatorix. He was again among his brothers and sisters, a warrior more fighting for the gods. Odin, Thor, Loki, and all the other members of Aesir could be felt, celebrating the ancient feats of the past. 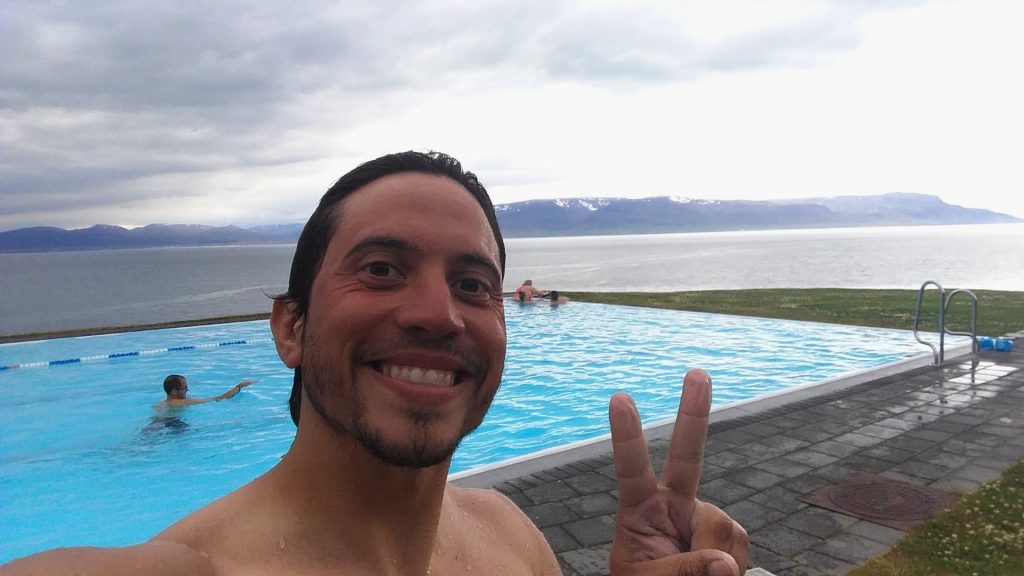 In Hófsos I enjoyed by courtesy of a new Danish friend, Anders, who, knowing my story, decided to invite me to the thermal pool located in the village. The views are amazing! Tak my friend! 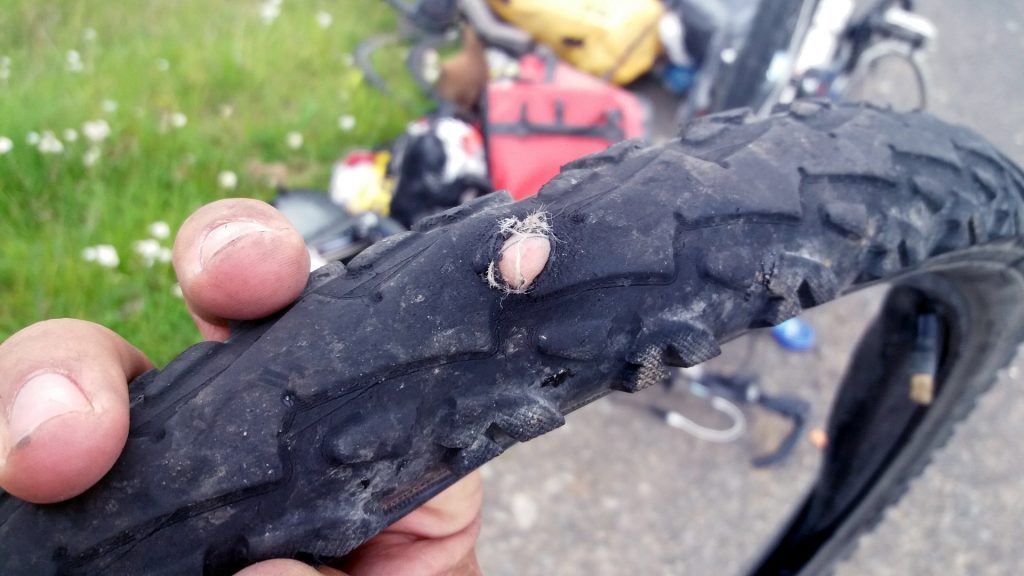 The kilometers despite, especially in the tires. In the morning the tire was deformed, creating a horrible bump. I thought I could handle the day, but the wheel did not decide that way. Evening burlap and a hole that fit a finger :/ 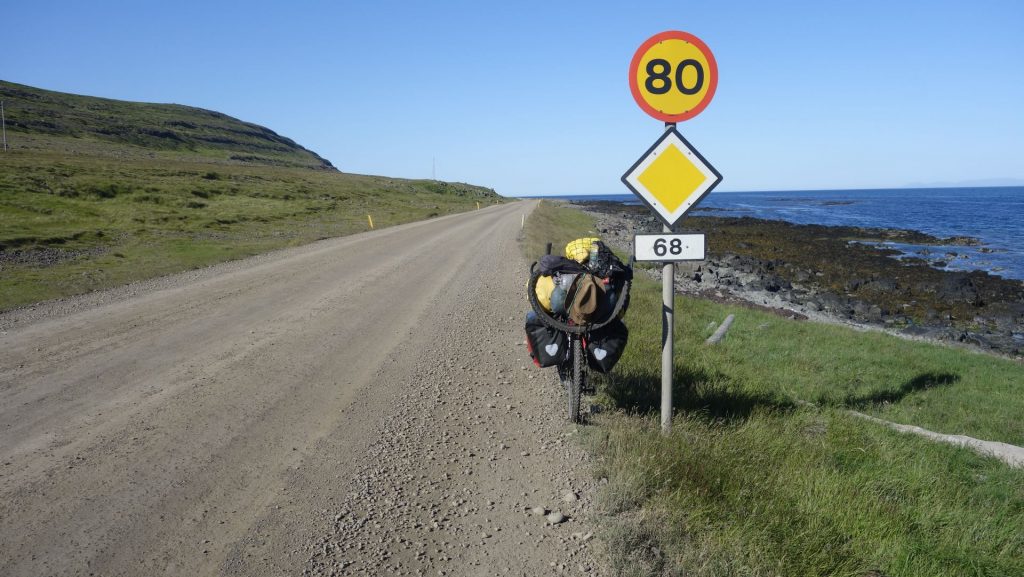 Even so there is nothing that stops me going at the moment. The maximum speed on asphalt is 90km / h, in gravel is 80km / h. The precaution is maximum as you can check. Luckily people usually have two fingers in front, although they do not slow down when they overtake me or cross the tracks, forcing me to eat a lot of dust and throw stones to me… 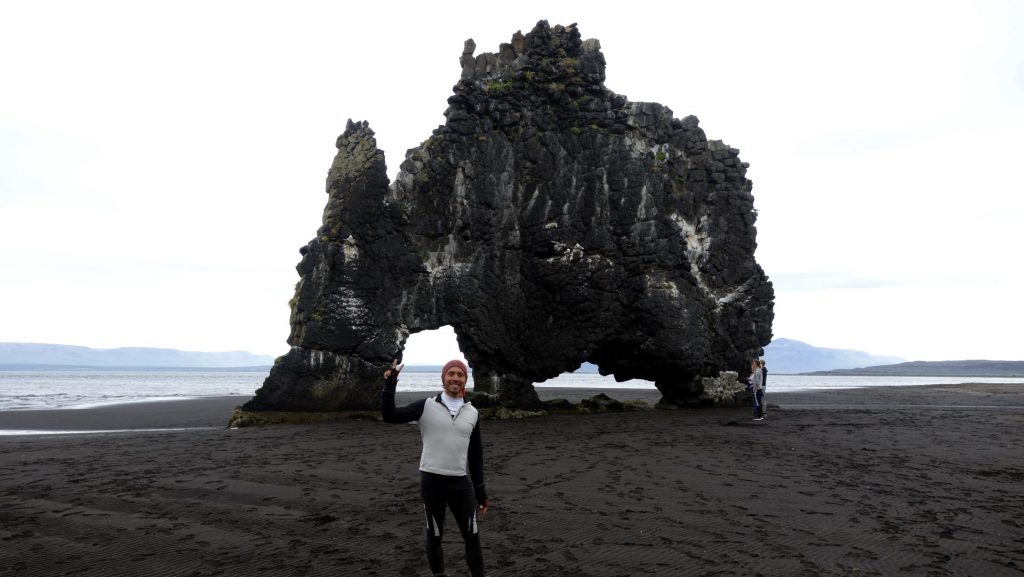 With my stomach laden with minerals, I came to Hvítserkur. This trip I was lucky, if in Hófsos I met a couple from Madrid who gave me a tray of Iberian loin, here I met a couple of Murcia who prepared me a sandwich of black leg ham, thank you so much for such delicious delicacies! And like this column of basalt, which the Icelanders call troll, I say that it is a Finnish Muumi or giant hippopotamus and, like me, with a black leg, with a black leg! 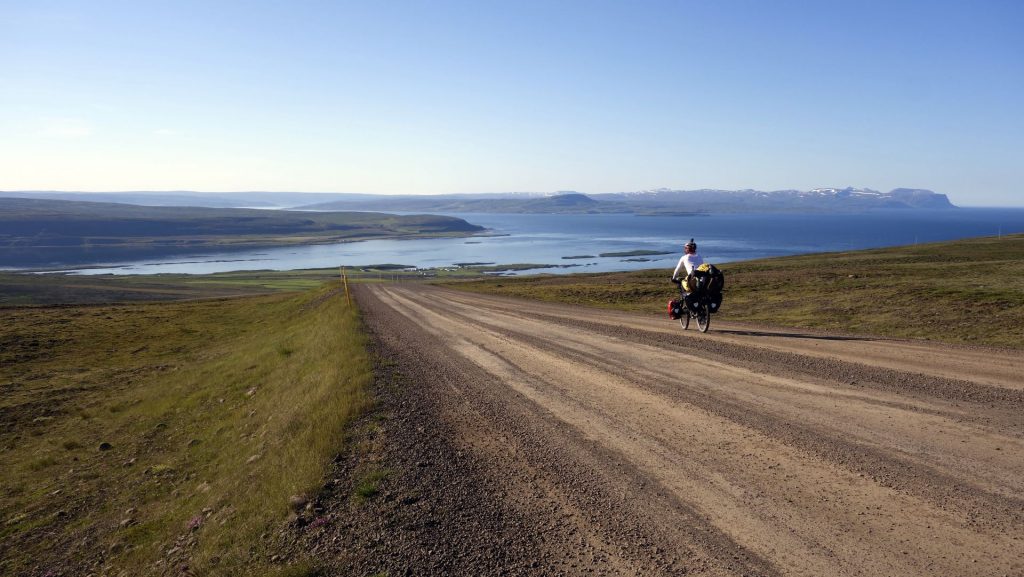 The continuous route to the west fjords. The story of the screenwriter puts me to the test once more. This part of the island is, of the most beautiful, and the least visited of the country. The scale of the landscape rises between gravel roads, convoluted climbs and populations reduced to a minimum. It is the oldest geographically part of Iceland, has less geothermal activity but, by contrast, more free swimming pools and natural hot springs throughout the north. A luxury for anyone who ventures. 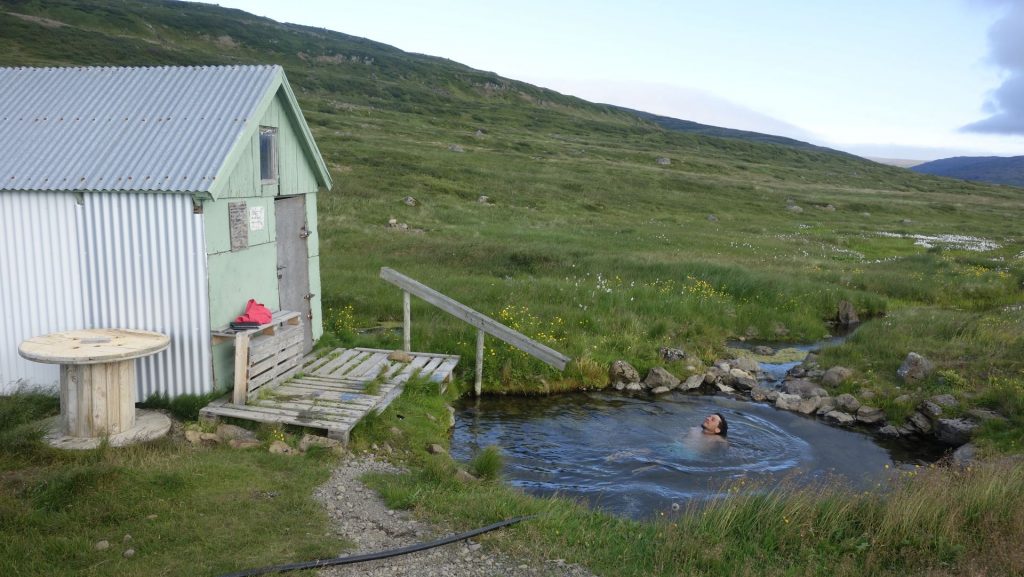 Unfortunately for us, those of us who enjoy this blog, this is the last photo of my camera. The fatality, called the wind, carried it several meters beyond where it was situated, destroying it. All the enjoyment and joy I wanted to convey to all my readers was blown away. 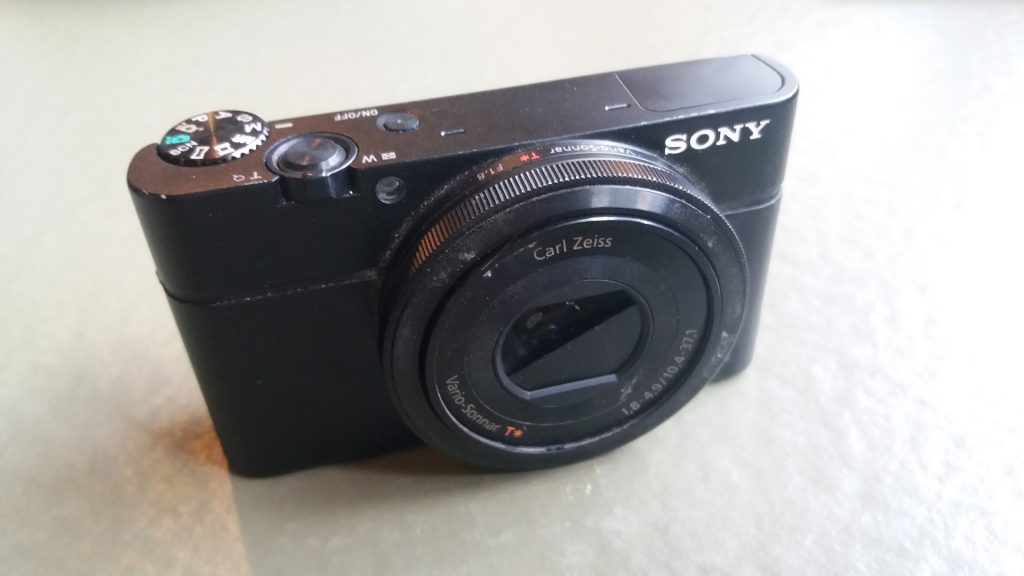 Those who follow me know how I don’t like to ask for help. I would not if I did not have to. The cameras are expensive, impossible for me to get one right now. But the trip continues and I would like to continue sharing my experience with the same quality that I have been doing so far. I have two weeks left to reach the capital of Iceland and buy one. That’s why I’ve opened a campaign on GoFundMe to raise funds and get a new one. If you like what I do, and you want to help me, go to the next link and make a small donation. Between all we will get the money to continue enjoying the best photos. I still have the south of the island, the blue lagoon, the Geysir, the Landmannalaugar, the glaciers of Vatnajökul, Askja, the desert … and the aurora borealis!

Enter the link if you want to help: https://www.gofundme.com/una-camara-para-los-viajes-de-manel

Thank you all for your collaboration and continue reading me all these days. It is a pleasure for me to continue sharing this incredible experience of life.